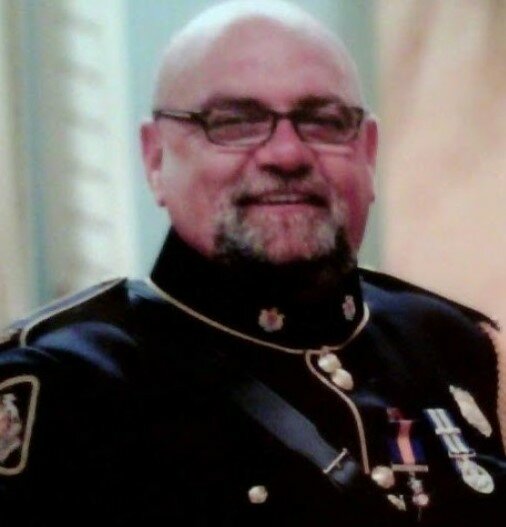 Stephen Edwin Patterson, 72, of Saint John, passed peacefully on January 21 at the Saint John Regional Hospital after a yearlong battle with bone cancer.

He was born in 1950 to parents Alice and Edwin Isaac Patterson.

A proud O'Brien Fellow, he completed an undergraduate degree in Sociology at the University of New Brunswick, and a Master of Science in Criminal Justice and Law Enforcement Administration at Northeastern University in Boston.

After 40 years with the Saint John Police Force, spending many of those years active on the executive of CUPE Local 61, he retired as a Staff Sergeant in 2011. He was a recipient of the Queen's Jubilee Medal, the Order of Merit of the Police Forces of Canada, and a Canadian Police Exemplary Service Medal, all bestowed upon him by the Governor General of Canada.

He was preceded in death by his parents, his brother Rick, and his first wife Lynda.

The end of life is not easy, and it isn't for the faint of heart. Steve's wife and daughter will be forever grateful for the time, the care, and the kindness of family friends including Dennis Boyle, Pauline Breau, Robert DiPasquale, Raymona and David Dow, Shelley Gerrior, Ann and Ted Hoyt, Grenville Ingraham, Al Johnson, Allan Levine, John Martel, Father David Martin, Jimmy May, Lucinda Mills, Peter Montague, and David Parks. The care of his nutritionist Karen and his nurse Barb from the New Brunswick Extra-Mural Program made it possible for Steve to live his final months on his own terms and to remain comfortably at home until 3 days before his passing. It meant the world to him that he was able to fully enjoy his last wish, a final Christmas holiday with all of the bells and whistles - a house decorated from top to bottom, unwrapping gifts on Christmas morning, Christmas dinner with his family gathered around his grandmother's treasured dining table, and a late-night Irish toast by the light of the Christmas tree.

Arrangements are under the care and direction of Castle Fallsview Funeral Home, 309 Lancaster Avenue (506-634-1701). In keeping with Stephen’s wishes, cremation has taken place. A visitation will be held on Friday January 27, 2023, at Castle Funeral Home from 6pm to 8pm. A memorial service will be held on Saturday January 28, 2023, at Castle “Fallsview” Chapel at 10am. Interment will take place in Ocean View Memorial Gardens at a later date. Donations to the Canadian Cancer Society would be appreciated by the family. Online condolences can be made at www.castlefh.ca