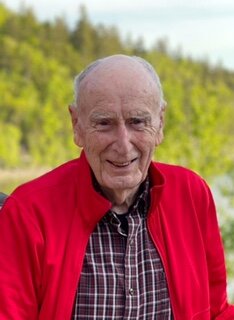 It is with sadness that the family announces the passing of Frederick Joseph Whelan at the Saint John Regional Hospital (SJRH) on April 2, 2022. Fred was married to the late Anita Gertrude (McCabe) Whelan for 63 wonderful years. Fred was born on February 16, 1926 in Kildare, PEI and was the son of the late Francis Whelan and Winnifred (Ready) Whelan.

Fred is survived by:  sons John (Margaret MacCallum) Whelan of Saint John and their children Alex (Laura) , Jennifer (Tom) and Jonathan; and Tom (Heather) Whelan of Saint John and their son Padraic; and his daughters Beth Whelan of Saint John; and Anne Marie Whelan (Gregory Drodge) of Dartmouth and children Mitchell and Stacey; and his oldest grandchild Kathleen Chapman (Jonathan Doiron). He was great-grandfather to Sophie, Benjamin, and Celeste. Fred is also survived by sister-in-law Claire Weatherbie (Jack deceased) and brother-in-law Joseph (Miriam) McCabe and fondly remembered by several nieces and nephews. He is also survived by Reginald MacLellan; they grew up as brothers and remained life-long friends.

In addition to his wife, Fred was predeceased by his first-born child Janice Marion Chapman (mother of Kathleen) and by sisters Anne (Alfred) Branca, Ella Whelan and Sister Noreen Whelan CND.

Fred graduated with a pharmacy degree from Dalhousie University in 1953 and worked at and later co-owned Wasson’s Pharmacy in Saint John, NB.  Fred married Anita in 1953 and they spent all their married life in the west side of Saint John. We were blessed to have Fred as our father and role model, as he was kind, compassionate, resilient, honest, humble, and had a great sense of humor. To family and friends, he was known as “gentle Fred”. Fred was a man of strong faith, a member of the Our Lady of the Assumption Church. Upon retirement Fred loved to golf (Westfield Golf and Country Club) and bowl and spending time with Anita, family and friends playing bridge.

Thanks to the nurses and staff at 3BSouth at the SJRH; and to Dr. Sayeda Mohiyddin who provided excellent medical care to dad while he was a resident at Parkland Saint John.  To the staff and residents of Carleton Hall, who became like family to dad, a heartfelt Thank You. You helped make dad feel like he was home these past few years. To Monsignor Brian Sheehan for his ongoing and unwavering spiritual support over the years... a heartfelt Thank You. The family is also so very grateful to Dr. Chris O'Brien for his compassionate care of Fred over these many years.

Resting at Castle Funeral Home, Fallsview Chapel, 309 Lancaster Ave, Saint John, NB E2M 2L3, 506-634-1701. Visitation will be held on Wednesday, April 6, 2022, from 4:00 to 8:00 pm.  A Mass of Christian Burial will be celebrated on Thursday, April 7, 2022, at 2:00 pm from Our Lady of the Assumption Catholic Church on Dufferin Row followed by a private family internment. For those unable to attend Fred’s Mass, the service will be live streamed through his obituary page on Castle’s website.  www.castlefh.ca

At the family's request please wear a mask when attending the visitation and Funeral Mass.

For those who wish, remembrances may be made to the Whelan Family Pharmacy Award (c/o Dalhousie University, Office of Advancement, MacDonald Building Halifax, Nova Scotia, B3H 3J5), Romero House or charity of one’s choice.

Share Your Memory of
Frederick
Upload Your Memory View All Memories
Be the first to upload a memory!
Share A Memory