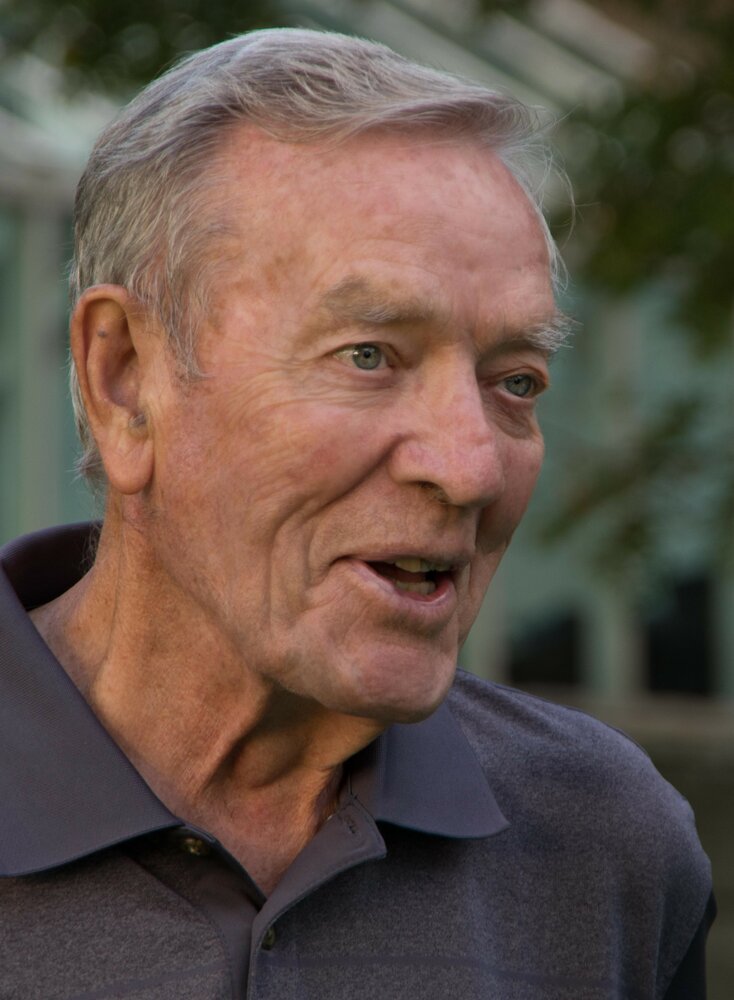 With gratitude for a long life, well lived, the family of Thomas Patrick Scanlon is saddened to announce his peaceful passing under the compassionate and competent care of the staff at Ridgewood Veterans Wing. Pat was born April 5, 1923 in Lewisham, UK. As a very young child he emigrated to Canada and settled in Montreal. After serving in the Canadian Army in WW 2 he moved to Saint John where his parents had settled. There he met Betty Malone who became the love of his life. They married in 1948 and had four children. Pat joined Richard and BA Ryan Construction company in 1949 and by 1962 he was the president and general manager of the Atlantic Ltd branch of the company. Some of his larger projects include the Saint John Regional hospital, Royal Bank on King St, UNBSJ Field House, UNB Fredericton residences 5 and 6 and theViaduct. He worked on projects throughout the Maritimes and in NF. Pat was a member of Riverside Golf and Country club for almost sixty years. He and Betty played a lot of golf. It was a big part of their lives and they made many friends at the club. Pat was most proud of the four Grey Cup Championships that he and Betty won during their years there. Pat was a charter member of the Canada Games Aquatic Centre. He regularly attended the deep water aquasize classes well into his nineties. Pat was an avid sports fan and had a remarkable memory for statistics. He served his community on the board of directors of the Saint John Non Profit housing association, as a member of the Saint John Construction Association, on the Cathedral Reconstruction committee and delivered Meals on Wheels. Pat is survived by his daughter Patricia Kaine (Ed), sons Paul Scanlon (Lydia) and Mark Scanlon (Wendy), grandchildren Ed Kaine(Annie), Kathleen Milhorn(JJ), Michael Kaine(Laura), Annemarie Scanlon, Julia Scanlon, and Joanna Scanlon and great grandchildren Thomas and Stephen Kaine, Erika and Jeremiah Milhorn, and Charlie and Elizabeth Kaine. Pat was predeceased by his son, Richard in 1960, his wife Betty in 2005 and his nephew and dear friend David Alexander in 2021.

Resting at Castle Funeral Home, 309 Lancaster Avenue, Saint John, NB, ( 634-1701).  A visitation will be held on Wednesday, October 20th from 3 pm to 7p.m.  Mass of Christian burial will take place on Thursday, October 21, 2021 at Our Lady of Assumption Church at 12:00 Noon.  Interment will take place in St. Joseph's Cemetery.  On line condolences can be made at www.castlefh.ca.

Due to Covid-19 health measures placed on indoor gatherings by the government of N.B., all attending the funeral service 12 and over will be required to provide proof of vaccination and a piece of government ID or proof of medical exemption.

Live streaming of service can be found at:

Share Your Memory of
Pat
Upload Your Memory View All Memories
Be the first to upload a memory!
Share A Memory