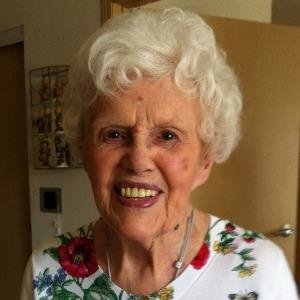 Obituary of Margaret A. Cherry

Margaret was a happy, lifelong resident of Saint John, New Brunswick. Born on February 5th, 1922, she was the daughter of Stephen Joseph Downing and Anna Winifred (Bonner) Downing. Margaret graduated with honours from St. Vincent's High School in 1940. The following year she graduated from Teachers College. She was appointed to the local school district where she taught for 2 years. Redirecting her vocation, she then attended Modern Business College followed by 3 enjoyable years of work in a military office. In 1946 she married Gregory Cherry. Most of Margaret's married life was spent in the home they had built on Lancaster Ave., in West Saint John. It was there they raised five loving children. Margaret was an active member of the beautiful Our Lady of the Assumption Church. She was a founding member of the Catholic Women's League, holding office of Parish President and Diocesan President. Margaret was a member of the Westfield Golf and Country Club as well as the Friendly Bridge Club. In their earlier years, Margaret and Greg loved to travel. In later years they spent winters in Florida. Over her lifetime Margaret enjoyed a very full, active life, her greatest happiness was her family: her five beautiful children, Joan, Paul (Dean), Don (Shirley), Kevin and Patricia (Mike); grandchildren, Colin, Jonathan, Ian, Greg, Keith and Reid; great grand daughters Vanessa, Alison, Ella Margaret and Ava Margaret and great grand son Theo; special friend Gwyn Morgan; sisters-in-law Kay Johnston and Helen Cherry and a host of treasured nieces, nephews and friends. Margaret was predeceased by her loving husband Greg, brothers Stephen and Thomas and sisters Theresa, Mary, Anne and Bertha. Margaret's infectious smile and kind and generous spirit left a lasting impression; in her own words, “It was great to be together.” Arrangements are under the care of Castle Funeral Home, 309 Lancaster Avenue, Saint John NB, E2M2L3. (506)634-1701. Visitation will be held on Thursday, July 19th 2018 from 2PM-4PM and 6PM- 8PM. A Mass of Christian Burial will be held at Our Lady of Assumption Church on Friday, July 20th 2018 at 10AM. Interment will be held Holy Cross Cemetery. A reception will follow at Castle “Fallsview” Reception Center. Donations in Margaret’s memory can be made to Bobby’s Hospice, Salvation Army, Rocmaura Foundation, or donor’s choice. Online Condolences can be made at www.castlefh.com

Share Your Memory of
Margaret
Upload Your Memory View All Memories
Be the first to upload a memory!
Share A Memory