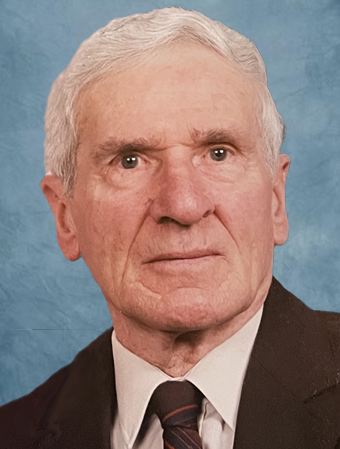 Jim joined the Merchant Navy as a proud seaman from 1945 – 1948, and then joined the Winterport as a Long Shoreman. Later in his adulthood, Jim began his 25-year career with Kimberly Clark as a foreman, retiring in 1984.

With a passion of hockey, Jim coached for the Lancaster Minor Hockey League for several years. He shared his love for the game and his favourite team, the Toronto Maple Leafs, with his family. Faith also played a big role in Jim’s life as he attended services regularly and volunteered for church suppers. Jim was also a long-time member of the Legion Branch 69.

Jim is predeceased by his loving wife of 71 years, Florence Ramona (nee Green) Dow; parents Robert and Annie; and brothers Robert and Leonard.

The family would like to extend a special thank-you to Extramural, Bayshore Health Care - especially his caregivers Marlene and Laura, and the entire Palliative Care Unit team at the Saint John Regional Hospital for your exceptional care.

Resting at Castle Fallsview Funeral Home, 309 Lancaster Ave, Saint John, NB (634-1701). Visitation for Jim will be held on Saturday, October 22, 2022, from 11:00 – 1:00 PM with a Celebration of Life directly following at the Castle Fallsview Chapel for 1:00 PM. The Dow family kindly requests that those in attendance please wear masks. Donations in Jim’s memory can be made to the Saint John SPCA,  MADD Saint John Chapter, or charity of your choice. For those who wish, condolences may be made by visiting www.castlefh.ca

Share Your Memory of
James (Jim)
Upload Your Memory View All Memories
Be the first to upload a memory!
Share A Memory