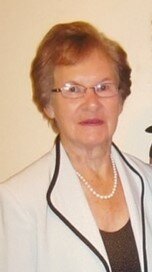 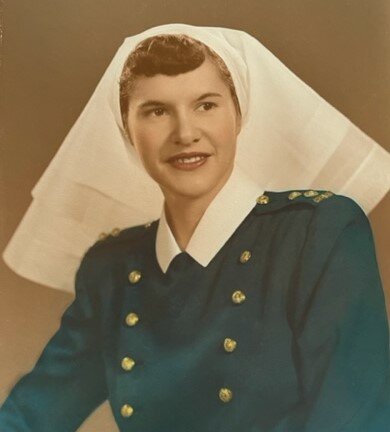 It is with both sadness and acceptance that the family of Marjorie C. (Horsnell) Whitcomb announce her passing on Sept 22, 2022, at Bobby’s Hospice with her family by her side. Born in Fredericton in 1925, Marjorie was a daughter of the late Alfred and Alice E. (Cordrey) Horsnell, and widow of the late G. Murdoch Whitcomb.

Marjorie graduated from Fredericton High School and Saint John General School of Nursing, after which she joined the Army and was immediately sent to Toronto. She was soon called to serve in the Korean War, helping treat and care for wounded soldiers. After the war, Marjorie returned home and was stationed in Western Canada, eventually being transferred to Chilliwack BC where she met her future husband Murdoch Whitcomb.

When “Mom” wasn’t in the kitchen preparing her wonderful family meals, baking pies or making cookies, she could be found playing bridge or curling with her friends at the Carlton Curling Club.

Marj spent her summers at her cottage at Lake George close to her siblings. She was the kind and gentle Nanny who enjoyed a houseful of children and grandchildren coming and going all summer long. Marj would watch with great interest, the loons, ducks and hummingbirds, beautiful blue skies and sunsets and enjoyed sharing “Happy Hour” on the deck with neighbours and family. One of the greatest gifts our Mom passed along to her children and grandchildren is the importance of family. “Caring and sharing” were certainly two of the most important and prominent of her many attributes. She lived a rich, full life and will be truly missed.

Castle Funeral Home 309 Lancaster Ave. Saint John, N.B. have been entrusted with the arrangements. A celebration of Marjorie’s life will be held on Saturday October 1, 2022, at Castle “Fallsview” Chapel at 2 pm. Interment will take place in Fredericton, N.B. in the spring of 2023.

Donations to Bobby’s Hospice or the charity of the donor’s choice would be appreciated by the family. Online condolences can be made at www.castlefh.ca

Share Your Memory of
Marjorie
Upload Your Memory View All Memories
Be the first to upload a memory!
Share A Memory