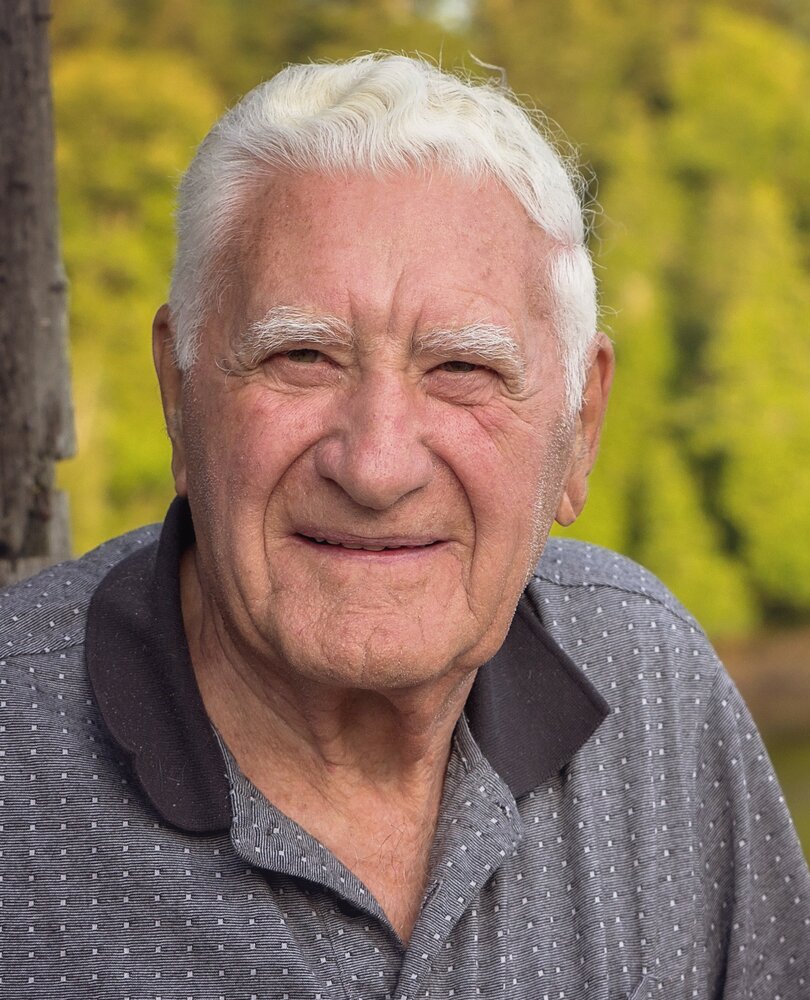 It is with gratitude for a long life lived the family of Donald McBrien, husband of the late Elsie (Newcombe) McBrien, announces his passing on Saturday, July 30, 2022, at the Ridgewood Veteran’s Wing. Don grew up a proud North Ender, the son of Hazel Ann (Daye) and Albert Earle McBrien. He spent his most memorable summers throughout his life in Bayswater, his second home.

In addition to his spouse, Donald is pre-deceased by his sister, Marian Smith.

Donald, Don, Mick, Mickey  - what you called him depended on where you knew him from, but he answered to all of them the same. Don always had a smile or a cheery hello for everyone who crossed his path. He had a beautiful smile, a love of laughter, a booming voice and the gift of gab; he loved meeting new people and making new friends. The girls often heard, “Oh you’re Don’s daughter! I just love Don!”, because you’d be hard pressed to find someone that didn’t love Don.

Don’s work ethic was second to none. While still in school he worked at the Wasson’s pharmacy on Main St. North, delivering prescriptions for 10cents an hour. He joined the Canadian Army when he was 18yo and was stationed in Debert, NS with the No 3 Infantry Training Battalion when WWII ended. Don would always say that he was one of the lucky ones. He didn’t have to go overseas and he was able to come home to his family at the end of the war, when so many soldiers didn’t. His time in the service allowed him to acquire training in bookkeeping, which afforded him a lifelong career in accounting. Don started his professional career at Simms Brush Factory, later moving onto the West Saint John Community Hospital (DVA West) and then retiring from the SJRH Accounting Dept after over 33 years of service.

Don was well known over the past decade for being the old guy who would drive from his home on the westside to the Westfield Diner for breakfast, lunch and sometimes even dinner! He was a regular you could set your watch by! He loved chatting with all the boys, hearing only ½ the conversation from his reserved spot at the head of the table which created some confusion and crazy stories that were sometimes less than believable! His diner family loved him and looked out for him like his blood family. His fame is notable as they named a breakfast after him “The Don” – 2 eggs, toast and coffee was his regular morning order.

The family would like to thank the staff of Ridgewood Veteran’s Wing – Liberty Lane for Don’s care over the past year and a half. A few staff that we had the chance to meet and see provide loving care for Dad, RNs – Cindy, Ashley & Janet; LPNs – Ron, Craig & Kelly; OT Jennifer V; PT Jennifer H; RecT – Nicole; Spiritual Care – Tom; and Unit Manager – Lori. All of the staff from the security (especially Ken, Jack & George), housekeeping and dietary staff were very kind and compassionate.

Castle Funeral Home, 309 Lancaster Ave. Saint John (506 634 1701) has been entrusted with the arrangements. Visitation will take place Sunday, Aug 7 from 2-4pm and 6-8pm. Celebration of Life will take place at the Castle Fallsview Chapel on Monday, Aug 8, at 11am. Donations to the SJRH Foundation – Ridgewood Veteran’s Wing Comfort Fund, or the Charity of the donor’s choice would be appreciated by the family. Complete obituary can be viewed and online condolences can be made at www. Castlefh.ca

One thing you would never hear Don say was Goodbye…but rather “Bye for now!”. So rather than saying goodbye – let’s just say “Bye for now”.