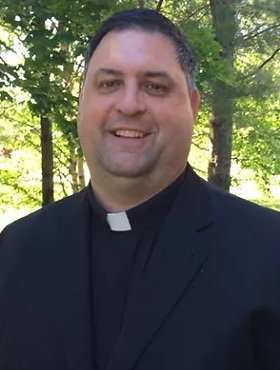 The Rev. Jonathan Springthorpe joined his Lord and Saviour on Wednesday, April 13, 2022. Jonathan was born in Stockton-on-Tees, England to John and Carole (Slater) Springthorpe.

Jonathan will be dearly missed by his loving wife Kristen Springthorpe (Doan) of 20 years, their children; Elijah, Jeremy and Olivia, father John (Maureen), sister Andrea Wolfe and her husband Jim, niece Sadie Wolfe, nephew Allan Barnett and his wife Justine, great niece Raeya, parents in law Bev and Neal Doan, brother in law Jeff and his wife Ting Doan, and family dog Charlie. He is predeceased by his mother Carole.

Jonathan spent his early childhood in England and Africa. At the age of 8, his family immigrated to British Columbia eventually settling in Abbotsford, BC. He attended WJ Mouat Secondary School and graduated with the class of 1992. In BC Jonathan developed a love for acting, he was involved with various companies and ultimately became an accredited actor. He was also growing his interest in cooking and joined the culinary industry.

Jonathan met the Lord while attending St. Matthews Church in Abbotsford, BC. He immersed himself into the church and became involved with the Youth Group, which is where he met his future wife, Kristen. Jonathan and Kristen married in 2002 at St. Matthews Church.

In 2000, Jonathan was still working in the culinary industry and volunteering with St. Matthew’s church. There, Church Army officer David Denault saw Jonathan’s potential; his dedication to the Lord and his true passion for helping people and introduced him to Capt. Bruce Smith. This is when his journey into ministry started. St. Matthews Church remained a very special place to Jonathan all his life as this was the place he met the Lord, his wife and started his path to priesthood.

In 2001, Jonathan trained at Taylor College in Saint John with Church Army Canada (Threshold Ministries). The Most Rev. David Edwards introduced him to The Rev. Canon Ed Coleman who became his spiritual mentor. Jonathan started as the youth minister at St. Paul’s, Hampton before moving to the Stone Church where he oversaw the Youth Group and created the Hard Stone Café. This was a safe place for youth to gather, bands to play music and non-alcoholic beverages were served. He also led numerous mission trips to New York City for several years.

Jonathan took a call to ordination and began courses through Regent College and went on to earn his Master’s in Theology from Wycliffe College in Toronto. He began his career at Emmanuel Church, in Richmond Hill Ontario with Rev. Dr. Peter Robinson. Upon Jonathan’s return to New Brunswick, he started ministering at the Parish of Musquash, assisted at the Stone Church, Saint John Vineyard Church, Westside Anglican Mission, and then in 2020 Jonathan was appointed Priest and Rector of the Parish of Lancaster, at The Church of the Good Shepherd.

Jonathan deeply cared for people and always wanted to help in any way he could. He loved looking after his Westside community. He was also passionate about his Youth Ministry and was involved with camp ministry at Camp Medley. He always made sure to take the time off so he could minster there each summer. His deep desire to help people lead him to his devotion of assisting those during times of mourning which was a ministry close to his heart.

Jonathan treasured days spent with his family; they had many fond memories of times at New River Beach, camping at Twin Shores, PEI in the summer, visiting family in England and British Columbia, and going hiking with Charlie. Jonathan integrated scripture and prayer into everyday life with his children, he would teach prayers and read passages to them. He always made father son time and father daughter time. He taught Eli and Jeremy how to BBQ in the summer months, passing on his passion of cooking, and would take Olivia for ice cream. His family was extremely important to him.

Jonathan continued to keep his love for cooking alive and it became important to his family as well. He enjoyed trying and recreating authentic cultured dishes for his family; especially Mexican, Greek, and Indian dishes; he made great enchiladas. Jonathan was very creative, he enjoyed drawing, painting and writing. Jonathan was also involved in the Saint John Shakespeare Festival for several years.

In lieu of flowers donations in Jonathan’s memory can be made to The Church of the Good Shepherd, Camp Medley, Outflow Ministries, or a charity of the donor’s choice.

Share Your Memory of
Reverend Jonathan
Upload Your Memory View All Memories
Be the first to upload a memory!
Share A Memory