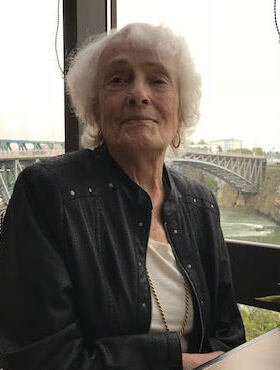 On December 2nd, 2021, Alice Beatrice Galbraith (Fair), of Saint John, passed away at the Saint John Regional Hospital after a period of failing health. She was the daughter of the late Dorothy L. Fair (Dykeman) and Arthur L. Fair. She was only 12 years old when her father was killed in Belgium, during the Second World War. As the eldest of five children, she grew up fiercely independent and feisty. She was also a very kind and generous person.

Mom was a true west-sider and spent most of her life residing close to the home where she was born, in lower west side Saint John. For many years she and dad were part of the Lorneville crowd that enjoyed a weekly lunch at the Coffee Mill restaurant. In later years she and dad enjoyed wintering in Florida and taking cruises around the Caribbean area.

Mom loved large family gatherings, especially the annual Boxing Day get-together, where she demonstrated her superb cooking and baking skills. She was happiest when reading a good book and having tea with friends.

Her family would like to thank the compassionate and caring nursing staff on 3D South at the Saint John Regional Hospital, and the wonderful care providers at the St. Stephen Seniors Complex.

Arrangements are under the care of Castle Fallsview Funeral Home, 309 Lancaster Avenue, Saint John, NB E2M 2L3, 506-634-1701. A Graveside Service will be held on Saturday, June 25, 2022 at 3:30 PM in Lorneville Cemetery. Donations in memory of Alice Galbraith may be made to the Empty Stocking Fund of Saint John or to the Salvation Army Christmas Campaign. Online condolences can be made at www.castlefh.ca

Share Your Memory of
Alice
Upload Your Memory View All Memories
Be the first to upload a memory!
Share A Memory