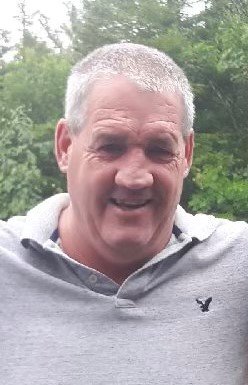 It is with great sadness that the family of Kevin Allan Flanagan announces his sudden and untimely passing  on Thursday, July 8, 2021. Kevin was born on December 4, 1964 in Dalhousie, NB to Joseph and Barbara  (Lawlor) Flanagan.

Kevin is survived by his mother Barbara; partner Vicki Brown; children Kate, Ryan and Jack Flanagan;  step-children Jesse and Michael Brown; siblings Gerald, Mark. Shawn and Cheryl Flanagan; eight nieces  and nephews: Kendall, Erin, Brogan, Briah, Kaitlyn, Lauren, Casey and Keely. He is also survived by his  beloved aunts, uncles and his many cousins in Navan, ON, Minnesota and elsewhere in Ontario and  Atlantic Canada whom he loved dearly. Kevin was predeceased by his father Joseph Flanagan.

Kevin graduated from Bathurst High School in 1982 and went immediately to work as an apprentice  pipefitter. For almost forty years he has been a member of Locals 506 and 325 and he was very proud of  his association with his brotherhood of Pipefitters and Steamfitters.

Kevin was equally proud of his Irish heritage and of his boisterous extended family and their trademark  irreverent and teasing humour.

Kevin‘s most notable qualities were his work ethic and his loyalty. These attributes were demonstrated in  his volunteer efforts with the Saint John City Gents Hockey league, the Pavilion Cup, Westside co-op  preschool, in his long-standing membership in the United Association of Plumbers and Pipefitters and also  in the countless hours he spent helping friends and family with renos, repairs and projects. He never said  no to any request and he never stopped until the job was done. Most recently he applied his efforts and  skill to his role as a project manager with Winmar Property Restoration Specialists.

His favourite pastime was surely cooking and entertaining. He was masterful at the barbecue. There  were always seconds and his signature generosity was never more evident than in the portions he served  to everyone lucky enough to be a guest in his home.

He was a kind, good tempered and hard-working man, a loving partner and a proud father. He will be dearly missed by so many.

Resting at Castle Funeral Home, 309 Lancaster Avenue, Saint John, NB E2M 2L3, 506-634-1701. Visitation  will be held on Tuesday, July 13, 2021 from 2:00 PM - 4:00 PM and 6:00 PM- 8:00 PM. Due to Covid-19  limitations a Private Memorial Service will be from Castle Funeral Home on Wednesday, July 14, 2021 at  11:00 AM. The service will be live streamed through Castle Funeral Home for those unable to attend.  Interment will take place at a later date. Donations can be made to New Brunswick Heart and Stroke Foundation,  New Brunswick Canadian Cancer Society, or Mind Care Saint John. Online condolences can be made at www.castlefh.ca.

Share Your Memory of
Kevin
Upload Your Memory View All Memories
Be the first to upload a memory!
Share A Memory