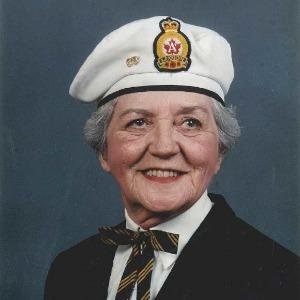 At the Saint John Regional Hospital on Sunday, July 8, 2018, Trudy Yeomans passed away. Born in Saint John, she was the daughter of the late Roy Burnett and Lenoir (Moulton). While she grew up in West Saint John, she also spent many years in Montreal and recently Forest Hills. Shortly after the end of the Korean War, Trudy enlisted with the Royal Canadian Air Force. Her training and service there took her to St-Jean, QC and London, ON. After leaving the RCAF, she was employed with CP Rail in Montreal and Saint John until her retirement. She was an active member of the Royal Canadian Legion Branch# 69 and was quite proud to be awarded her lifetime membership. She spent many years camping with her friends and family each summer at Pine Cone campground in Sussex, eventually mastering the ability to drive a motor home. Trudy was an avid supporter of all things Legion-related. She volunteered tirelessly in the kitchen, on many committees, the annual Poppy Drive, and the Executive leadership of the Ladies Auxiliary. She loved watching the horse races, playing darts for the legion team, and going to the Sunday Night Dances at Branch 69 legion. She enjoyed socializing at many retired service personnel events. Veteran’s comfort and rights were very near to her heart and she was willing to do whatever she could to make sure their needs were met inside and outside of the Legion. Above all, her family was the focus of her life. She loved her children, grandchildren, nieces, and nephews, and the extended family she acquired with her second marriage at the young age of 67. She is survived by her daughters, Edith Tippett of Utopia, NB, and Geraldine (Wayne Wilson), two grandchildren, Tiffany and Christopher Wilson, her sisters Frances Wylie and Sandra Connor, all of Saint John, and one brother Frank Burnett (Helen) of Barrie, ON, many stepchildren and step-grandchildren/great grandchildren, and several nieces and nephews. Besides her husband, Ronald Yeomans, she was predeceased by her first husband Karl Tippett, her son, Gregory Burnett, and her brother, George Burnett. Arrangements are under the care of Castle Funeral Home, 309 Lancaster Ave Saint John, NB E2M 2L3 (506)634-1701. Visitation will be held at Castle on Tuesday, July 10th from 6-8 PM, and Wednesday, July 11th from 2-4 PM and 6-8 PM. Funeral service will be held at Castle Funeral Home at 2 PM on Thursday, July 12. Interment to follow in Old Cedar Hill Cemetery on Lancaster Avenue. A reception will be held at the Royal Canadian Legion Branch #69 on Wilson St following interment. Donations in Trudy’s memory can be made to Bobby’s Hospice, the Last Post Fund, or the donor’s choice. Online condolences can be made at www.castlefh.com

Share Your Memory of
Gertrude
Upload Your Memory View All Memories
Be the first to upload a memory!
Share A Memory