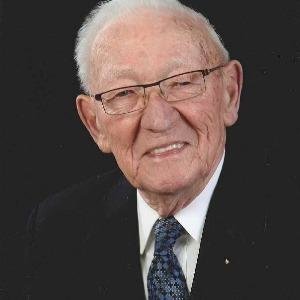 Seguard LeRoy (“Roy”) Wooldridge-Vincent, 89, passed away on Monday, March 19, 2018. He was born on February 2, 1929, in Saint John, NB. In 1933, Roy’s father passed away, he and his two sisters boarded at the NB Protestant Orphanage until 1939. Then, when his mother remarried, she took the children home. At the age of fourteen, Roy was employed as a messenger at Saint John Shipbuilding and, in his fiftieth working year, retired as General Manager. Roy was a member of the Society of Naval Architects and Marine Engineers and the former head of the Machinists’ Union. He was on the Committee that successfully petitioned Ottawa to obtain the forty-hour work week. His work overseeing the construction of engines took him to England, Denmark and Japan. However, his number one priority was giving his unconditional love to his family and extended family. He coached competitive Little League and the first Minor Hockey Atlantic team to participate in a Quebec Peewee International Hockey Tournament. He also proudly supported his three sons in the harness racing industry. In later years, he was an enthusiastic supporter at his grandchildren’s sporting events. Roy was a long-time member of Silver Falls United Church and was very involved as a Trustee. He was pleased to be a sixty-year member of the Masonic Lodge (Albion). He enjoyed spending time with family; bowling; playing and watching sports; reading military stories; and listening to his favourite country music songs. Roy was preceded in death by his parents, Medley and Lillian Wooldridge; his stepfather, George Vincent; his first wife, Elise (Pedersen); his sister, Helen Frawsel; his son-in-law, David Cunningham; and his brother, Melvin Vincent. He is survived by his spouse, Constance (nee Connick); his sons, Gary (Kathleen), Robert (Paula), and LeRoy (Janet); his daughters, Dianne Cunningham and Carolyn Hepburn (Harry); his stepchildren, Jennifer (Mark) Palk; Timothy (Meaghan); Grant Harrigan; many grandchildren; and great-grandchildren. His beloved grandchildren are Danny, Robin, Nickolaj, Colleen, Cathleen, Tim, Rob, Brandon, Geoff, Heidi, Nicole, Nickolas, Niels, Annah, Emmah, James, Marissa, Maeve, Nolan and Leo; his sister, Frances Middleton. Roy will long be remembered for his legacy of wisdom, humour and love of family. He will always live in the memories of those who loved, respected and treasured him. Funeral service will be held at Silver Falls United Church, 840 Loch Lomond Road, in Saint John, NB, at 10 am, on Saturday, March 24. Visitation will be held at Castle Funeral Home, 309 Lancaster Ave., Saint John, NB at 2-4 pm and 6-8 pm on both Thursday, March 22, and Friday, March 23. A Masonic Service will be held Friday, March 23, at 7 pm. Burial will follow the funeral service and will be at Ocean View Cemetery, 715 Latimore Lake Road, Saint John. The family would like to extend thanks and appreciation to Medical Staff of the Saint John Regional Hospital Emergency Department, 4CN and the Palliative Care Unit.

Share Your Memory of
Seguard
Upload Your Memory View All Memories
Be the first to upload a memory!
Share A Memory