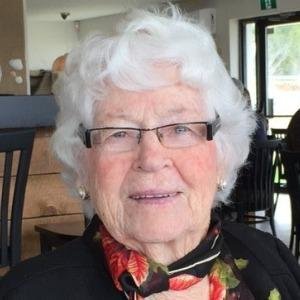 It is with great sadness that the family ofin her 94th year, announce her passing at Bobby’s Hospice on February 16, 2021. Fay was born on April 11, 1927 to the late Carl and Beatrice (Murray) Hopkins in Chipman, NB. In Fay’s younger years, after moving to Saint John, she worked as a seamstress at Eastern Textiles with her sister Myrtle. After WWII Fay married her husband Ernest, and they spent a lot of time travelling together, often attending Liberation Day in Holland. Fay was a truly talented seamstress; she made bridal gowns and everything in between, you name it and she could make it! She was crafty and enjoyed working with her hands; Fay was an avid knitter and gardener. She loved flowers and often got compliments on her beautiful flower gardens. Fay was reserved but had a great sense of humor. Fay was a long-time member of Carleton Kirk United Church and a member of Carleton Curling Club for over 50 years. Fay and Ernest were very active in Shriners Fundraising (Railway Unit), and they also enjoyed attending Masonic Temple functions over the years where Ernest was a member. Fay will be dearly missed by her children; Donald Scott (Janice) and Elizabeth Ann Craig (Bill), sister Mary Lemon (late Howard), grandchildren; Zachary (Kathleen) and Graeme (Kate) Scott, and Fallon (Daniel) Craig, sisters in law; Vivian Hopkins (late Murray) and Edna Hopkins (late Goldwyn), brother-in -law Bill Somerville (late Ruth) and many nieces and nephews. Fay is predeceased by her parents, husband Ernest Scott, infant son David Scott, daughter Cindy (Seaman) Scott, 10 siblings; Murray, Goldwyn and Charlie Hopkins, Myrtle Burpee (Almond), Ruby Anderson (Derald), Dorothy Chase (Harold), Murina Laskey (Archie), Verna Glenn (John), Ruth Somerville and Hazel Hopkins. Resting at Castle Funeral Home, 309 Lancaster Avenue, Saint John, NB E2M 2L3 506-634-1701. Visitation will be held on Friday, February 19, 2021 from 2PM to 6PM. Please be advised due to Covid-19 restrictions ONLY 25 PEOPLE at a time are allowed entry for visitation. A Private Family Memorial Service will be held from Carleton Kirk United Church on Saturday, February 20, 2021 at 10:00AM., the service will be livestreamed for those who wish to partake. Interment will follow in Cedar Hill Extension Cemetery. In lieu of flowers donations to the Carleton Kirk United Church would be appreciated by the family. Online condolences can be made at www.castlefh.com. http://www.livememorialservices.com/Home/ServiceDetail/10893

Share Your Memory of
Fay
Upload Your Memory View All Memories
Be the first to upload a memory!
Share A Memory