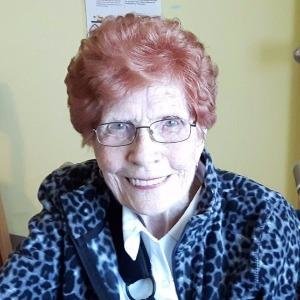 It is with great sadness, the family of Nancy Butler would like to announce her passing on Tuesday, June 13, 2017 at SJRH. Nancy was born on April 19, 1926 in Scotland to the late Herbert P. and Marion (Crawford) George. Nancy was a very active member of the community; she was past president of Legion Branch #68, past president of Carleton #2 L.A. Branch, member of #69 Branch seniors club, New Brunswick Command Sports Coordinator and member of Our Lady of the Assumption Catholic Church. She worked tirelessly for the Legion, Ladies Auxiliary and many different campaigns and committees. Nancy received the Meritorious Service award from the Ladies Auxiliary, and in 2001 won Citizen of the year (Westside). She is survived and will be dearly missed by her two sons; Michael Butler of Saint John, Lorin George of Nova Scotia, daughters; Nancy Richardson and her husband Robert of PEI, Gloria Rushton and her husband Richard of Saint John, Elizabeth MacDonald and her husband Ian of Rothesay, sister; Marion Fillmore of Musquash, eleven grandchildren, eight great grandchildren, several nieces, nephews and cousins. Nancy was predeceased by parents, husband; Gerard, son; Richard, grandson; Lorin George, granddaughter; Shannon Butler, brothers; Herbert Jr. George, Lorin George and John George. Arrangements are under the care of Castle Funeral Home, 309 Lancaster Ave. Saint John, N.B. (634 1701). Visitation will be held on Thursday, June 15, 2:00PM-4:00PM and 7:00PM-9:00PM. A Funeral service will be held on Friday, June 16, at 2:00PM in the Castle Funeral Home Chapel. Interment will take place following the Funeral service at Field of Honor- Cedar Hill Cemetery. A reception will follow at the Legion Branch #69. Donations to Field of Honor- Cedar Hill Cemetery or the charity of the donor’s choice would be appreciated by the family. Online condolences can be made at www. Castlefh.com

Share Your Memory of
Nancy
Upload Your Memory View All Memories
Be the first to upload a memory!