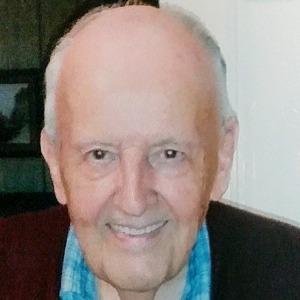 It is with great sadness the family announces the passing of John Louis Leonard which occurred surrounded by his family on Thursday March 22, 2018. Born 1933 in Saint John, N.B., he was the son of the late Gerard and Bernetta (Walsh) Leonard. Louis is survived by his loving wife of 62 years, Therese Leonard (Robichaud). Louis worked at Public Works of Canada retiring after over 35 years. His quick Irish wit will be missed by all who knew him. He will be lovingly missed by his five children, Joanne (Samuel) Gideon, of Richmond Hill, Ontario, Alan (Rochelle), of Saint John, N.B., Shirley, of Saint John, N.B., Stephen (Daniel), of Ramona, California, and Derek (Fion), of Toronto, Ontario. Louis is also survived by his grandchildren, Zachary Gideon, Terez Gideon, Aaron Gideon and David Leonard, Michael Leonard (their mother Angela Cerrulo). Brother-in- law Lawrence Robichaud and sister-in-law Joye Robichaud. Several nieces and nephews and Franklin (Norton). Besides his parents he was predeceased by his only sibling Richard (Dick) and Vina Leonard, two special grand-daughters in infancy Samuela and Jasmine and brother and sisters-in-law Arthur and Anita Leonard, Charles and Georgina Allen, Lionel Robichaud, Barbara Robichaud, Marjorie Robichaud and Therese’s beloved aunt Adeline Brown. Special thank you to Dr. Christopher O’Brien and staff for all their care and compassion over many years. Thanks to Extra Mural staff (Marjorie). Arrangements are under the care of Castle Funeral Home 309 Lancaster ave, Saint John NB, E2M 2L3. (506)-634-1701. By Louis’ request there will be no visitation or service. A private burial will be held at a future date. Online Condolences can be made at www.castlefh.com