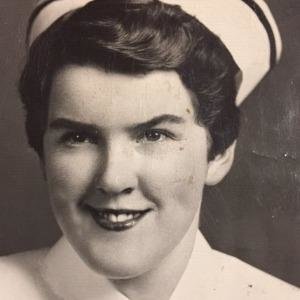 The peaceful passing of Marian Elizabeth (McKean) Melvin, beloved wife of Arthur A. Melvin, occurred at Tucker Hall, Parkland Saint John on Friday, December 4, 2020. Marian was born in Roger Hill, Pictou County, N.S. and graduated from Pictou Academy in 1954 and the Saint John General Hospital in 1956. She worked as a Registered Nurse (RN) for 45 Years. She was a former member of the Sea Belles and Amnesty International and was an active in her faith with Carleton- Kirk United Church. Marian was an avid bowler, poet, crossword solver, walker and traveller. She loved to laugh and always had a story or joke to share. She dearly loved spending time with her two daughters and their families. Marian is survived by her husband, Art, daughters, Diane (Bert) Gerwin, of New Westminster, B.C. and Ellen (Gary) Snider, of Quispamsis, and four wonderful grandchildren, Brigitte (Matt) Gerwin-Venner, Nicole Gerwin (Chris Vanjoff), and Daniel and Jacob Snider, along with several nieces and nephews. Marian was predeceased by her parents, Fulton Weir McKean and Vesta (McKay) McKean, as well as her adored sisters, Yvonne, Muriel, Naida, and Lois, all from Nova Scotia. Castle Funeral Home 309 Lancaster Ave. Saint John, (634 1701) have been entrusted with the arrangements. As per Marian’s wishes cremation has taken place. There will be no visitation or funeral service. Interment will take place in Cedar Hill ext. at a later date. Donation's to Romero House Soup Kitchen or Bobby's Hospice would be appreciated by the family. Online condolences can be made at www. Castlefh.com

Share Your Memory of
Marian
Upload Your Memory View All Memories
Be the first to upload a memory!
Share A Memory